Fishing A Different River: Evolving Strategies and Mindsets in Riding

That title may seem like a bit of an oxymoron, but allow me to explain. Despite (or perhaps because of?) growing up in a family of fisherman, hunters, and general outdoors men, fishing has never particularly captured my attention. My terrible eyesight makes the focus on the bobber or lure, or god forbid that near-invisible line, difficult, and my general impatience makes the rest of the fishing endeavor somewhat less than enticing. Now change the sport to Catching, and I'm there. 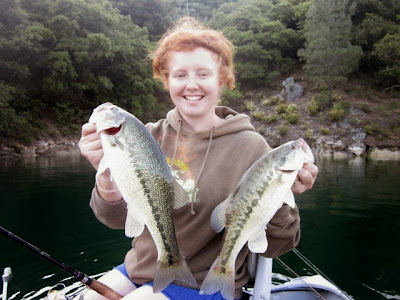 As luck would have it, I married the fishiest fisherman to walk the known earth since my own Grandpa, and as such my immersion in the fishing lingo and lifestyle has continued into my adult life. I have a general curiosity and interest in doing things well, and over the last 5 years I have spent many afternoons reading by the river while my husband went fishing; fewer afternoons but still many, I have done the fishing myself. I've learned to fly fish fairly respectably and give a hell of a cast with a spinning rod, my only real weaknesses being terrible sea sickness that take me out of the Ocean fishing game, and my pale skin that keeps me out of the standing/sitting in the sun for hours with sun reflecting off the water game. Oh, and remember, I don't really like fishing.

And yet, there is a simple beauty in fishing that calls up parallels to endurance riding in my mind. Anyone with a rod--or a horse--can attempt the sports, and it can be the Walmart rod or the Craigslist special steed and there is still a good shot at success if you've paid attention and done your homework. Sure, the guys with the fancy gear and snazzy lures and big boats  do better at some things, just like those people with the time and money and superbred high dollar horses often do well in certain areas of endurance. The thing is though that with fishing, like endurance, "success" depends entirely on your goals. If you're going out to Catch dinner, you'll be pleased with a fish to throw in the skillet. If you're going out to drink beer with friends and have lines in the water, catching nothing might be okay and catching a minnow could be thrilling. If you are hunting fish with the interest, intensity, and accuracy of a top of the chain 2 legged fish predator, nothing less than a fat limit will suffice. With each level of goal, more or less is required of fisherman and gear in various areas, and to truly excel, strategy and mental evolution become involved.

Sometimes you just want to have fun! My husband assists my 9 yr old niece last summer 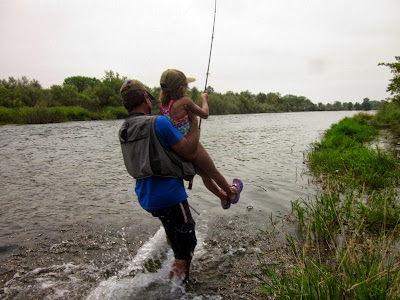 The same can be said of endurance, where dozens of people often start the same ride with completely different goals, ideas, and gear/steeds at their disposal. I am personally a mid to back of the rider whether I am doing LDs or 50s. I've top 10'd a bunch of LDs but not intentionally and my one top 10 in a 50 was an utter surprise and delight after one of those rare perfect rides, not to be repeated by me or my horse. I usually leave the Start a few minutes late, relax but leave no more than a few minutes late from vet checks-- because my turtle pace can't afford it!--and am very happy to finish the ride in Whatever-Place. T shirts and photos are just icing on the already delicious cake! To me finishing a mid pack 50 means complete success on my part. Just as fishing is to my husband, the ride itself, the time spent outdoors with a good horse or dog by your side, is The Thing. Catching beautiful fish nearly every time and finishing with a happy sound horse nearly every time (I wish it was every time, but let's be real) are our highs. 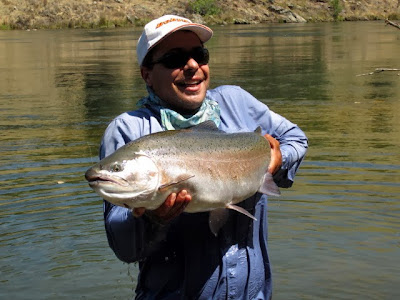 Aside from the mid pack and turtlers, there are many very competitive folks in endurance that go out with a mission to complete in a certain time or place and are satisfied with no less. They want their limits early and they want to be in their chairs with a cold drink when the other's stroll in. I completely admire and try to pay attention to those folks riding at a faster pace and a higher level than me. While I have no interest in riding that fast or finishing in a certain place, I respect the achievements of these horses and riders and learn what I can from them.

I've noticed too that my husband studies those fisherman working at his level and above, in different waters than he is, and he develops strategies and adapts his fishing to the fish and environment as such. He is always learning and "figuring out the water" and is successful at fishing more often than not with his flexible strategies and depth of knowledge. I see my own journey in endurance mirrored in his fishing, only he is farther ahead in his quest than me. Hey, he's got a decade on me too! ;-)   Really though, I am learning from him that I need to flex my own training and riding strategies as I look at an endurance career with a completely different horse partner. I can't expect to use the exact same training distances and ideas with Scrappy that I did with Desire, just as my husband can't cast the exact same lure at a species of fish in a completely different river. The current, or the nature of the beast, is what decides how we deal with it, and ignoring Scrappy's nature would be to both of our detriment.

Chamberlain Creek 2013, where I came up with most of this nonsense, and Rider Optioned after 20 miles 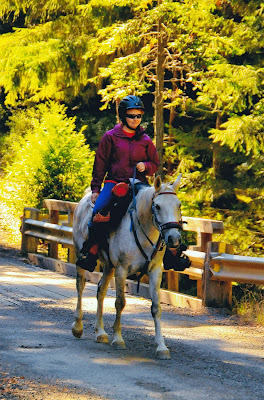 This has gone from a thread of an idea to a bit of a ramble-fest, but Lo, here's the heart of it: training strategies at Redheaded Endurance are a-changing. Scrappy is wise to my 8-14 mile rides and knows things now like I can hold my pee long enough to wait to get back to my pasture. What a Good idea!! No Scrappy, not a good idea. He also is a lazy boy by nature and he clearly isn't inspired nor I think getting fitter from these repetitive shorter distances.

My idea is to try to get in 2 (but at least 1) 20+ mile training rides and one short speed/hill work ride  from home each weak. I think he needs to get these longer distances in to take him to the next level physically and keep his great endurance horse attributes going as well. Basically I want this sucker thinking he may never get home so he better survive ;-) Really though, my ultimate goal with him is multi days and XPs, and he needs to embrace the Let's Go Forever instead of the We're Almost Done Fuck This Shit side of his nature. He isn't as naturally forward as Desire so I need to pay attention and adapt my thinking accordingly as he may lose inspiration or interest in things. He is very smart and if he's given an inch he'll take a mile, but I am figuring out his game I think. I'll probably laugh at that statement years down the line when I really know him, but still. I am paying attention now and I hope to see some positive results from upping our training program. 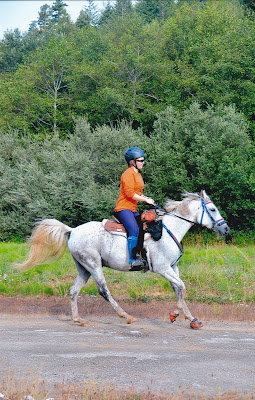 I am also trying to figure out why he periodically drags his left hind toe downhill. Chiropractor is due out next week and a knowledgeable friend suggested equine sciatica which I hadn't ever thought of, anyone know anything more about that? I can't take his toes back anymore and I think it's more of a leg/body thing than a hoof issue. He stopped dragging the toe with really consistent riding and hill work, so I am wondering if he doesn't need consistent work to get and keep that stifle/hock strong? And he could quite easily need a chiropractic adjustment as well, never having had one. We shall see. As with each new river, this new horse is teaching me things and opening my eyes to parts of myself and the world I hadn't known about. I hope he and I can continue to bond and never find our Limit. 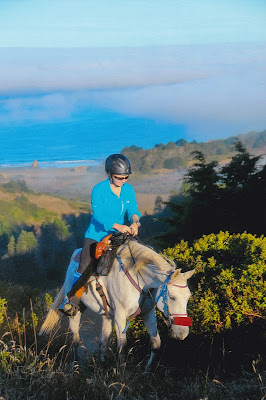