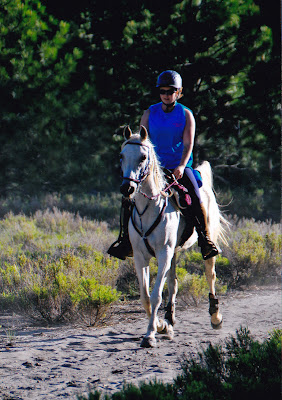 Day 2-->Getting the Heck Outta There

Saturday night ride dinner was Tri-tip and the usual fixings (salad, rolls, etc) and with another 50 completion under my belt, a heaped plate, and a splash from Funder's flask in my Coca Cola, I thoroughly enjoyed my evening. Before long it was bedtime though, with another 50 starting at 7 am the next morning.

This is the first ride camp trip with a new bedding strategy: 2 thick foam mats on top of each other instead of our usual air mattresses. It. Was. Epic. We bought a new air mattress for this ride season, which promptly failed at Whiskeytown, and when we saw the foam mats at the very random Surplus City store in town we had to go for it. They were about $50 a piece but are easy to roll up and strap on top of the camping load, can't go flat, are firm and officially now ride tested, rider approved. If I never have to inflate and screw with an air mattress again, I'll be happy.

SO, after a 4 am stumble-out-and-pee (does anyone else find it nearly impossible to stay vertical during an early morning ride camp pee stumble? I swear it's like I'm drunk, but probably just get up too quickly coz I've been holding it too long..) my alarm actually *woke me up* from a deep sleep at 6. The 25s and 50s were starting together at 7 since there were fewer riders, and after a morning chat with N and goodbye to Funder who was heading home, Desire and I were off for the start. Everyone did a trot-by for the vets on the way out to the trail and we were given the thumbs up so off we went on a 15 mile Pink loop. 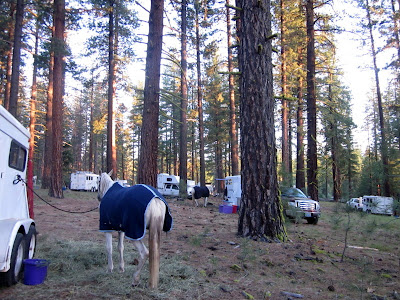 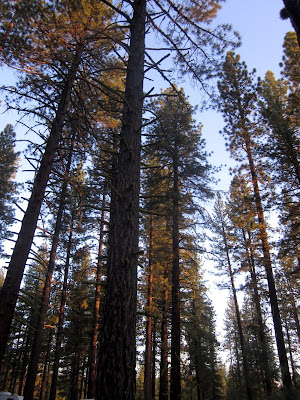 Surprise, surprise, you would never have guessed Desire had gone 50 miles the day before! We were on a nice loose reined walk for about 50 seconds until a rider passed us leaving camp and it was back to prance, prance, chomp, chomp. After turning her back towards camp to let a couple small groups pass, we picked up a decent collected trot and played leap frog for the first loop with D and her Foxtrotter mare on the 25 as well as a few other riders. I wish I had videoed D's mare Foxtrotting out as fast as Desire trotted, it was AMAZING. She's not a big mare and her feet were flying under her, but D sat steady as if none of that business was going on below, so clearly it was smooth. My Foxtrotter never Foxtrotted worth a damn, and that mare is the best at it I've ever seen. D is in her 70s and a very tough lady!

I know Desire is being a true pill when I'm checking my mileage over and over to see if we're getting close to camp yet. I had charged my phone full overnight so it lasted running the free mileage tracker app for a few hours. I was ready to be D-o-n-e with Loop 1 after about 10 miles and looked forward to a more normal-brained mare on Loop 2. A few miles from camp at a water trough one of her *beloved* splint boots slid down too far and she had a real leg kicking session, including circling me obnoxiously as I tried to fix it until a nice rider on the 25 offered to hold her head so I could get to her hind leg safely. At another point where I dismounted to walk her down a hill (rather than jig down the rocks), a pair of passing riders stopped and waited for me to get mounted which was also very nice. These small gestures on the trail when my mare is being a pill are SO appreciated, and I  mean to pass the good deeds on and encourage others to do so.

On the Trail, Day 2, wearing my completion award t-shirt from Day 1: 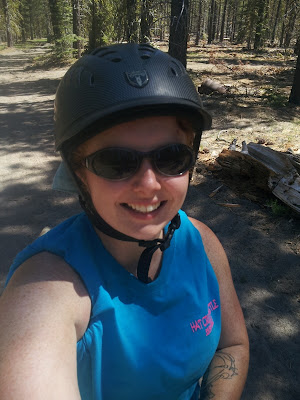 After the 15 mile Pink Loop there was a 1 hour hold since they were doing a big breakfast of biscuits n gravy, pancakes, sausages, and fruit. While I appreciated the food greatly after 15 miles of Mad Max Mare, it was a little weird to have an hour hold so early in the ride. Desire pulsed right down,  got all As, and went right to gobbling mash while I retrieved my biscuit and gravy feast. Georgia had some too.

In no time we were back out on the trail for a 25 mile Yellow loop. As predicted Desire was about 100 times better, happy to walk out at speed or pick up a consistent trot. We had a great time alternating walking and trotting depending on the rockiness of the road, then crossed the main road (with the aide of some cheery volunteers) and flew along some beautiful trails winding through the forest. The footing was great, there was plenty of shade, she was drinking and eating well, and felt sound, sound, sound.

Great footing through the shady forest: 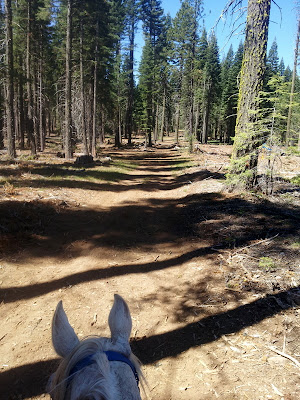 After the loop out, heading back to camp, a rider caught up to us and we fell to chatting at the water stop just after re-crossing the road. Turns out it was the lady who had given us electrolytes at at a time of crisis at the  Cache Creek 50 last month. She hadn't seen us since we were having some trouble at the bottom of the biggest hill in the heat of the afternoon, and was delighted to see that we had not only survived, but finished, and here we were at another ride. Riding together at the walk for a few miles, letting the horses graze intermittently, we chatted more and discovered she also lives near where I was born and had been married to the first vet I ever used in my hometown, so as usual endurance riding proved itself to be a very small world.

A few miles out from camp we decided to pick up the trot again and get in for the last hold. Her gelding trotted out and Desire started to but took a few funny steps. My heart jumped into my throat, I stopped her immediately, walked a few sound strides, then asked for a trot again and felt nothing, she trotted sound. I called to the lady who was trotting ahead and asked her to watch us trot, and she did but said she saw nothing and Desire looked sound. I slowed to the walk then picked up the trot again and she took a few more off steps.

And here enters the Ohhhhh shit.

It was pretty confounding. We had been swinging along at the trot in fine form just minutes before, now she was suddenly trotting lame every few steps???!!! The lady went on ahead to camp which prompted Desire to go cuckoo and since I didn't think jigging on a possible lameness was wise, I bailed off and had a hot, panicky walk down the gravel road in the sun back to camp. Fortunately it wasn't far and I zeroed in on Dr. Lydon immediately to come watch us trot. I pulled her tack, he checked her vitals and then had us trot and WOW, she was LAME. I mean from a few off steps out on the trail, the sound hand walking back, to now this moment, where she was now head bobbing lame on the left front at the trot. I was horrified, sad, frustrated, and felt inexplicably guilty. I didn't know what had caused it but was sure I had done something wrong. Lydon gave us his condolences, advised a few days rest and then a test trot out to be followed by vet visit if the problem persisted, and that was that. We went 90 out of 100 miles but it was not to be.

Desire was in fine spirits, slurping water and grazing greedily as we walked slowly back to our camp site, me lugging the saddle because I couldn't bring myself to put it back on her. She was always sound at the walk, but very sore on the left front to trot. I ditched my tack in a heap, cleaned her up and rubbed Sore No More on all her legs, syringed her a dose of electrolytes (none of which were spit out, miraculous) and she got to work on her second sloppy mash of the day. I debated on staying and letting her rest vs. getting home and getting the boots off, figuring things out etc, and just couldn't bring myself to sit there alone in camp all afternoon worrying. Camp was almost empty by that point and it was a relatively short haul home so I went for it and broke down camp. 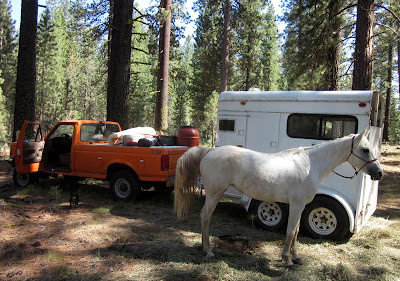 Try as I might I couldn't get my giant cooler back into the truck, it's too long to get my arms to both handles and was nearly full to boot, so I went in search of help, though talking to anyone was the last thing I wanted to do at that moment. It'll tell you how empty camp was that my cooler loading recruit was the ride manager Dr. Lydon himself, but I'm glad I found him as he made me feel a little better. I queried him on what I could learn from this experience and he said something along the lines of ,"Well you know, shit happens. If you flip the coins enough times, it's bound to come up heads."  Believe it or not, since I had no one to rant or cry to there in camp at the moment, I found it comforting somehow. I guess just that the ride vet didn't think I'd ridden my horse into the ground or done anything stupid, though I knew deep down I hadn't.

I got home Sunday night to find an electric gate opener hanging on a bow in the driveway, and our creaky old gates replaced with a shiny new electric gate!!! Holy cow!! 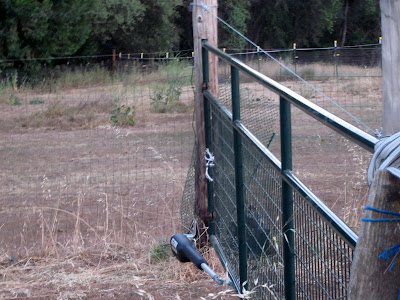 And pulled in only to see the ugly bed of weeds and holes in front of the house now looked like this: 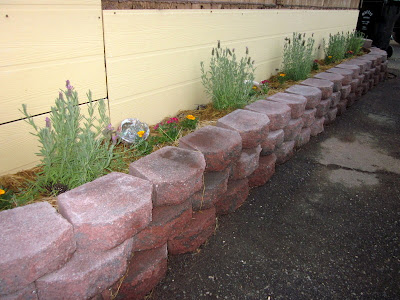 My first endurance pull, my first lameness issue...the left front is the boot my trimmer and I had trouble getting on the first time when we did the boots..we had to wait and file the glue off and reapply the same boot which already had Goober Glue in it..that is supposed to be extremely slow drying..but maybe in between times something got lumpy in there and made a pressure point? I don't think it could be a coincidence that the one boot we had trouble getting on is the leg she is sore on...?