Happy Birthday and My Filly is Growing Up!

First of all, happy birthday to my wonderful husband! He is a great, positive, supportive guy and I am very lucky to have him. 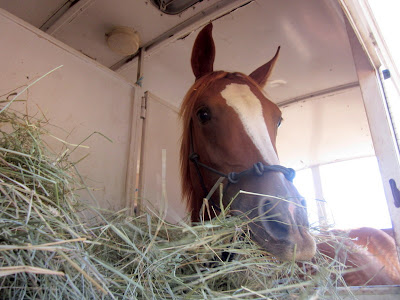 But first, Joey worked in the surcingle and long lines. He came out of the paddock spooky and snorty and after 2 weeks off from the trainer we were sure he was going to majorly regress at worst or be pretty hot at best. Once his fly mask was off (no limiting this guy's visibility when things are going down!) and he was in the cross ties he quieted into the routine right away and then had the best session in long lines he has had yet! He trotted off relaxed and loose instead of his usual initial high-and-tight, and even slowed to a walk in the lines a couple of times of his own accord. His head set is better each time and today he carried himself beautifully almost the whole time. It was a relatively short session as he was so much quieter and more responsive than we were expecting. For the first time when she whoa'd him and asked for a turn around with the outside rein he slowly turned and walked out of it, instead of spinning and immediately taking off. When he walked out so nicely and collected from the turn she immediately quit and took him up for a bath. He got tense and circled her for the hoof handling but by tricking his brain some more progress was made. Instead of going to his sticky right side which immediately makes him tense, she stayed on his left side but was rubbing and touching his right hind. His brain didn't go into auto-panic since she wasn't on the scary side, and he stood pretty nicely for her to rub all up and down his leg. She did go to his right side again and he circled and circled and circled endlessly until she switched sides again and touched him from the opposite side, then went back to the right, and that was apparently the combo of brain trickery he needed, as he gave in and let her rub his right hind from the right side. B thinks a step ahead of him and it isn't always easy as he is very clever! But by keeping him guessing and introducing new things while still working him on areas he feels confident and can excel in, I am seeing Joey grow in self confidence, fitness, and overall "thinking" ability.  Good things are to come with this one. 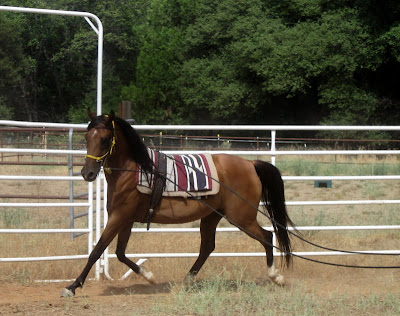 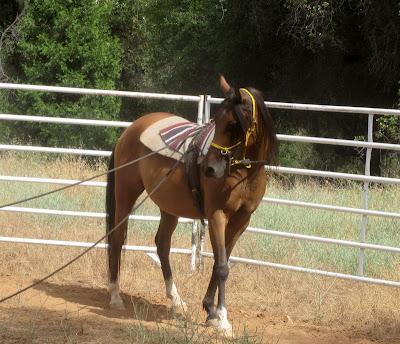 And then it was trailer time! It was a cool, breezy day, we even had some rain drops this morning--perfect weather for Sheza's first loading. I backed the trailer onto the grass, loaded Blaze in one stall, and B started the pressure, release as reward, game with Sheza. There is simply no way to drive a horse into the 2 horse straight load (especially with a buddy in there!) and Sheza wasn't particularly alarmed by the whole situation so the pressure and release method was the thing for it.

Hmm, you want me to go in where? 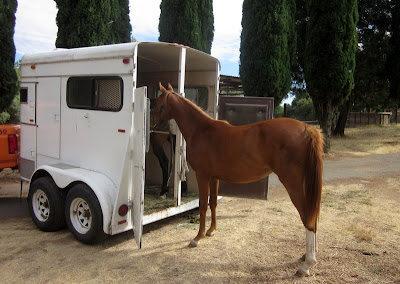 Filly out the butt end, Blaze's head out the front end, hehe 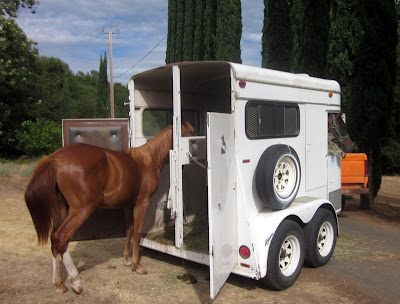 Sheza was content to stand at the edge of the trailer and lean in, snuff Blaze, eat hay, but was not getting the step-up concept. I lifted a front hoof and set it in there and that prompted a few theatrics but nothing spectacular, so I tried again. She kept back pedaling so B told me to get a broom. A whaaa? A broom. I fetched a broom. Now tickle her ankles. Hmm. Really?

And tickle I did. At first the tickle worked, and it unstuck her feet and moved her forward without any undue pressure. Then she got used to the tickle and it was more of a prickly poke. If she lifted a foot or stepped or even leaned forward, all pressure stopped. She still wasn't getting the step-up under way so I started picking up her front hoof, setting it in, and then as she got used to hanging out with it there, I went around and tickled her other ankle to encourage the step up. I probably set her hoof in the trailer a good 30 times, maybe more, and then we could see she was checking out. She would get to the edge of the trailer, then sort of relax and start to get sleepy eyed. B took her out and lunged her in both directions to get her feet moving, led her back, I set her hoof in, tickled her other front hoof, and UP she went! B let her hang out with her front hooves up, then calmly backed her out, and we repeated the set the hoof in, tickle, and step up. This time she went all the way in and was SO HAPPY to start devouring the hay in the manger that had been taunting her for so long. Got to love food motivated horses. 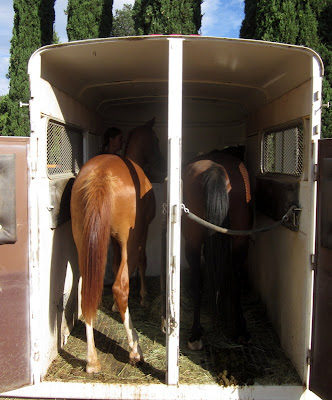 B backed her back out and it was a pretty darn nice, calm, back out for filly's first time: 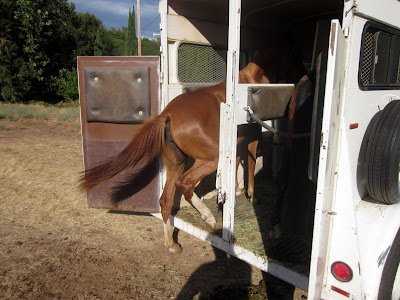 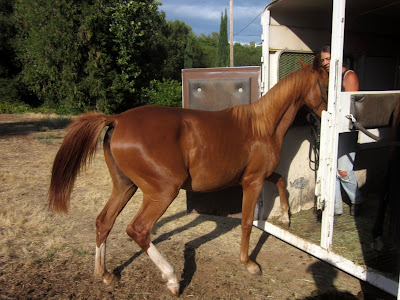 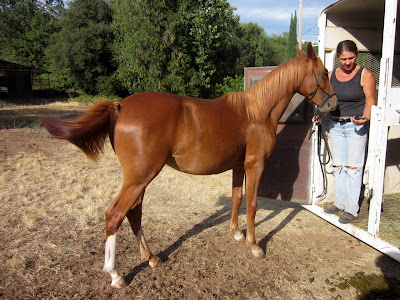 I had to set her front hoof in again and tickle the other front and she went right back in all the way. This time we secured everything and took them for a snails pace drive down around the corner, up to the mailboxes, and back. Just a little something to let her feel the movement and hills in a trailer without pushing our luck.  She whinnied at first but didn't move around much that I could feel and when I pulled back in the driveway and parked we opened the hay doors and let them sit in there for another couple of minutes. She was scarfing hay and pretty calm about the whole thing.

She got nervous when Blaze backed out but she came out relatively nicely and snuffled Blaze immediately like, "Whew, we survived!"  She had a sweat up from the whole process so she got a bath and fly spray dousing and went back to join her shrilly protesting mini boss, Bandito. She was pretty cute and rushed right to Desire's gate to get some reassurance from momma.


I'm so proud of my red rocket girl, she was a bit stubborn as expected but not dramatic, silly, or dangerous. There were no raised voices, injuries, or theatrics, and it ended with happy people and a happy filly who learned something very big today. So proud :-)