I woke up to pouring rain and thunder this morning, and horses that looked mad as wet cats, and dogs that wouldn't lay paw on the damp wood of the deck. The air now smells fresh for the first time in weeks (we've been getting heavy smoke from the American Fire at our house even before the Swedes Fire erupted) and the layer of Ash has been washed away. Maybe some of those rock hard summer hooves will even soften up for me briefly! 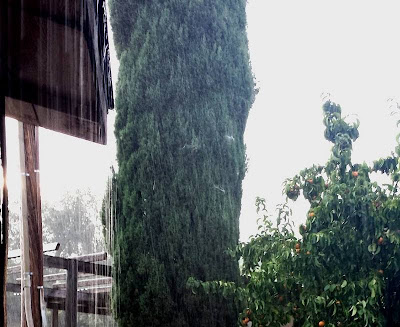 As of this morning the local Swedes fire is at 65% containment and all evacuees have been able to return home. At last report only 1 residence has been lost in the 2,000+ acre fire that has threatened 400+ structures throughout it's duration. Fire personnel numbers have reached as high as 900 and their  heroic efforts absolutely cannot be overstated. This fire burned up remote ridges and inaccessible, steep, and often brushy areas, and only a solid containment battle plan and extreme perseverance prevented it from continuing to spread through the remote but populated foothill communities. We had a very tense couple of days here just miles from the initial ignition point but that all pales in comparison to those that had to open the gates to their pastures and flee without their horses. Those folks mentioned recovered their horses the next day and their property was unscathed, by the way. We were close enough to the fire throughout that I stayed home with my trailer, ready to bail my own animals out if necessary, but friends of mine helped evacuate horses and I will be first in line to do that should this case arise again.  All this wordiness boils down to a big THANK YOU that I want to send out yet again to all the brave firefighting folks, volunteers, and community members that rushed out to help evacuate people and animals. As scary as this has been I can only say I feel safer now living in this dry tinder box area, after such a dedicated and effective community effort.

Life is returning to normal as the fire scare winds down and as it does I am suddenly realizing I'm leaving in 2 days for the Mendocino Magic ride! When that really hit home yesterday I immediately told myself, "you're a mess, so not prepared, how will you get ready!" Then my Endurance Brain shushed the Panic Brain and started listing everything out and turns out, as usual, I'm not more than a few hours of throwing shit in the truck away from being on the road early Thursday. I got a great deal on "used" brand new caged stirrups with fat immaculate foot cushions yesterday, so my feet will be HAPPY for 2 LDs at Mendo. I didn't know when I bought them but the bar at the top was wide enough that my fat western fenders fit right through properly without having to jerry rig the stirrups on! Luxury. I've got a spare Woolback pad and cinch for Mr. Sensitive Skin Scrappy, and am picking up a couple of Rennys for spares tomorrow morning from Mel.  I've got plenty of hay and Elk Grove in stock for Scrap and a culinary-inclined camping buddy is doing the food thing for us at the ride, so I'm pretty well set really!

And ooh look, I adapted a saddle and most of the tack I already had for Scrappy but he did get one thing of his very own, a little Scrappy Bling in the headstall department  ;-) 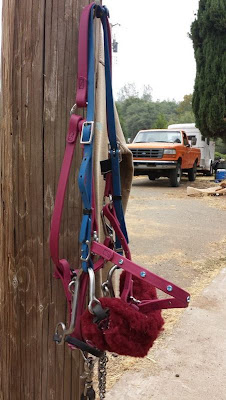 So, no, I'm not saying I'm planning..I'm just, you know, Ready-ish. And right now going out to trim some hooves. We'll just leave it at that and see what Thursday brings!
Posted by Unknown at 9:25 AM